The Bahamian-American actor, film director, and ambassador Sidney Poitier passed away on January 6, 2022 at the age of 94. He was the first black actor to ever win an Oscar, thus he will always be remembered as someone who broke down Hollywood’s racial barriers.

Born to parents who owned a farm in Cat Island in the Bahamas, Poitier was welcomed into this world three months prematurely during his parent’s visit to America where they sold their products. This granted Poitier an American citizenship. He spent his childhood years in his native country before moving to America at the age of 15. He lied about his age in order to serve the country during the World War II.

After leaving the army, he dreamed of becoming an actor, but due to his poor reading skills and his distinguishing thick accent, he couldn’t land any role. 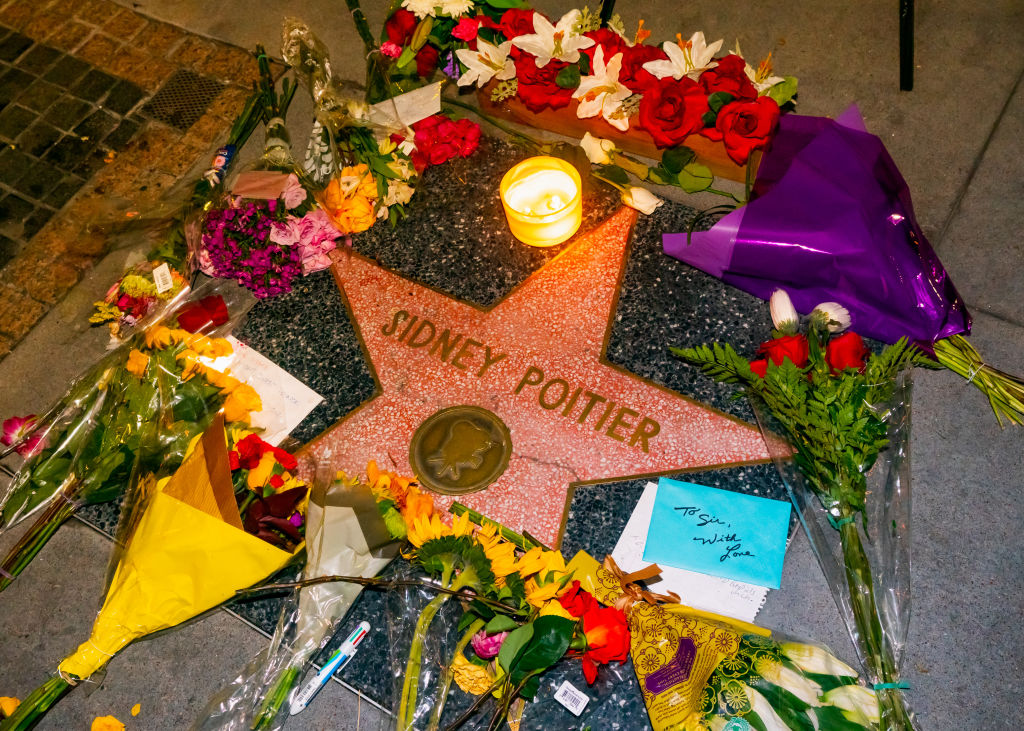 Hollywood honors actor Sidney Poitier at the site of his star on the Walk of Fame on January 08, 2022 in Hollywood, California. (Photo by AaronP/Bauer-Griffin/GC Images)
Instead, Poitier started working as a dishwasher but spent much of his time practicing reading and mimicking the accent from people he heard on the radio. With the help of one Jewish waiter, he perfected his reading skills and was ready to do auditions once again. This time, he got a role with the American Negro Theatre in Harlem, New York, and that was the start of a career which spanned many years. Poitier made his Broadway debut in Lysistrata in 1946 and went on to stare in over 55 movies, winning an Oscar for the film Lilies of the Field.

Many of the movies he was part of examined racial tensions, including Edge of the City, Band of Angels, and The Defiant Ones among the rest.
One of the films he held dearly to his heart was The Lost Man. Some may wonder why. It is because during the filming of it, he met the woman who became the great love of his life, Canadian actress Joanna Shimkus. Before her, Poitier was married to Juanita Hardy with whom he had four daughters. His first marriage was marked with infidelity. Poitier had a nine-year long affair with actress Diahann Carroll. 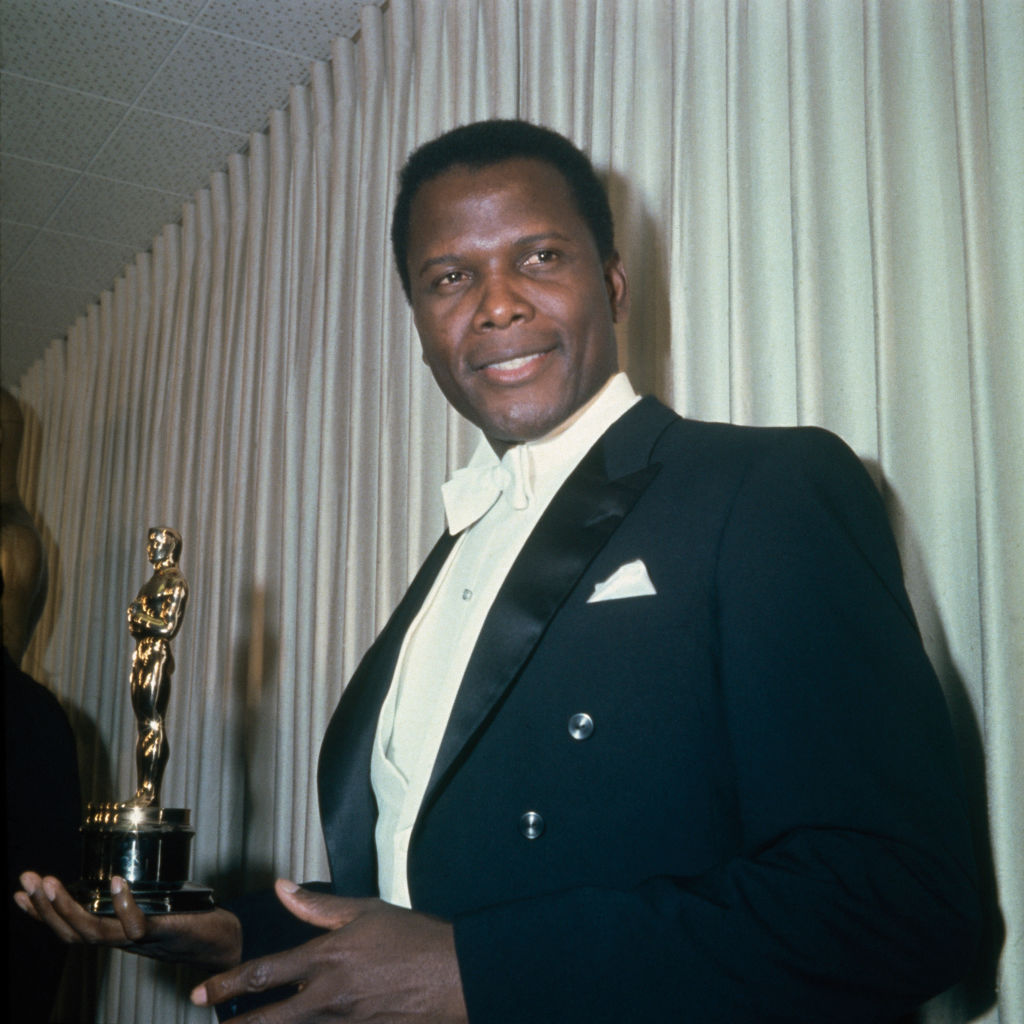 Bahamian-American actor Sidney Poitier at the 39th Academy Awards in Santa Monica, Los Angeles, 10th April 1967. He is presenting the award for Best Supporting Actress. (Photo by Archive Photos/Getty Images)
Poitier married his second wife in 1976 and stayed by her side until the last day of his life. Their love was profound and he never missed a chance to remind everyone how much she meant to him. They had two daughters, who both followed into their parents’ footsteps.

“I guess we were just destined to be [together],” Shimkus said of Poitier in 1998.

Speaking of the key to their long and happy marriage, the actor revealed in an interview with Closer, “There is one key ingredient my wife has helped me to recognize over the years, and that is the importance of articulating love for one another on a daily basis.”

“My wife and my children mean the most to me,” he told People in 2016, while Shimkus added, “We’ve been together 49 years and I’m a good cook. I cook every night. … I take good care of him.”

Despite divorcing his first wife, Poitier remained very close to her and his daughters.

Over the course of his life, besides receiving numerous awards for his incredible acting, Poitier also received the U.S. Presidential Medal of Freedom, and a knighthood from the Queen. He was also awarded an honorary Academy Award for his work in the entertainment industry.

Being an interracial couple, Poitier and Shimkus never really experienced any inconveniences. In the documentary Sidney Poitier: One Bright Light, she said, “I grew up in Canada and I never really had any kind of prejudice — it’s unlike America. I just never had those feelings. And we’ve never had a problem, actually. It could be that we lead a very quiet life. It could be that it’s just the way it is, I don’t really know. But I never really did see him as a Black man. I mean, I know he is Black, but I just saw him as a man, and he was just a wonderful person. An amazing human being.” 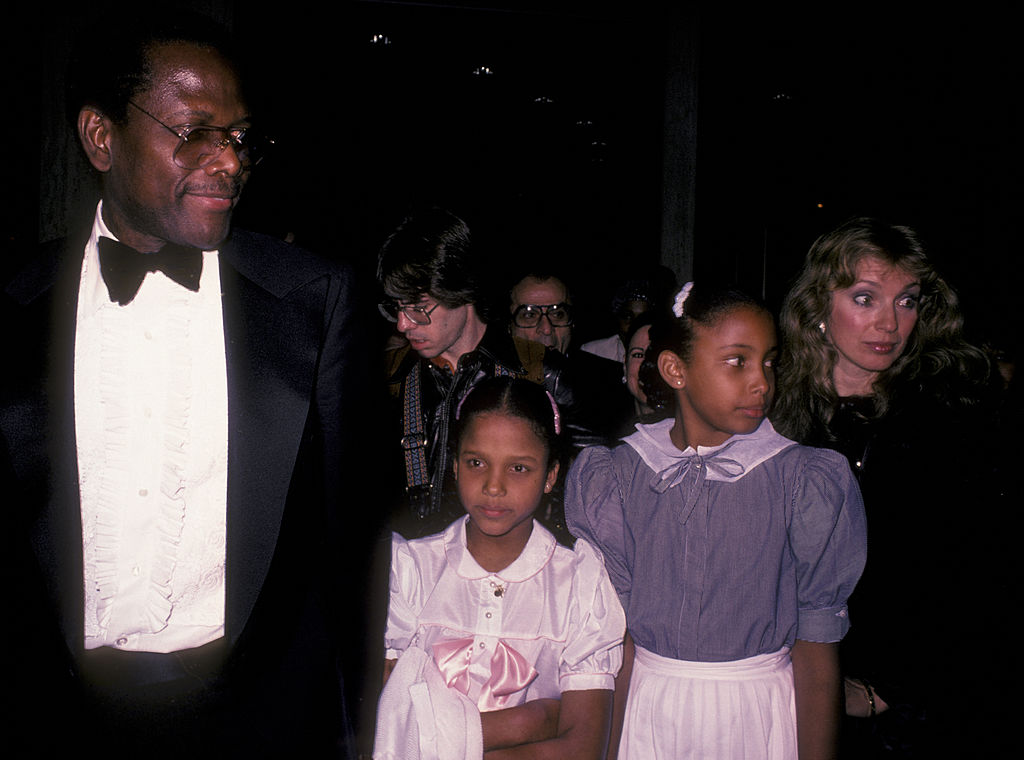 Sidney Poitier, wife Joanna Shimkus and daughters attend the opening of “Dreamgirls” on March 20, 1983 at the Shubert Theater in Century City, California.
(Photo by Ron Galella, Ltd./Ron Galella Collection via Getty Images)
Many of his colleagues and friends issued statements remembering Poitier’s greatness, both as an actor and as a gentle human being loved by many.
“For over 80 years, Sidney and I laughed, cried and made as much mischief as we could,” Harry Belafonte wrote. “He was truly my brother and partner in trying to make this world a little better. He certainly made mine a whole lot better.” 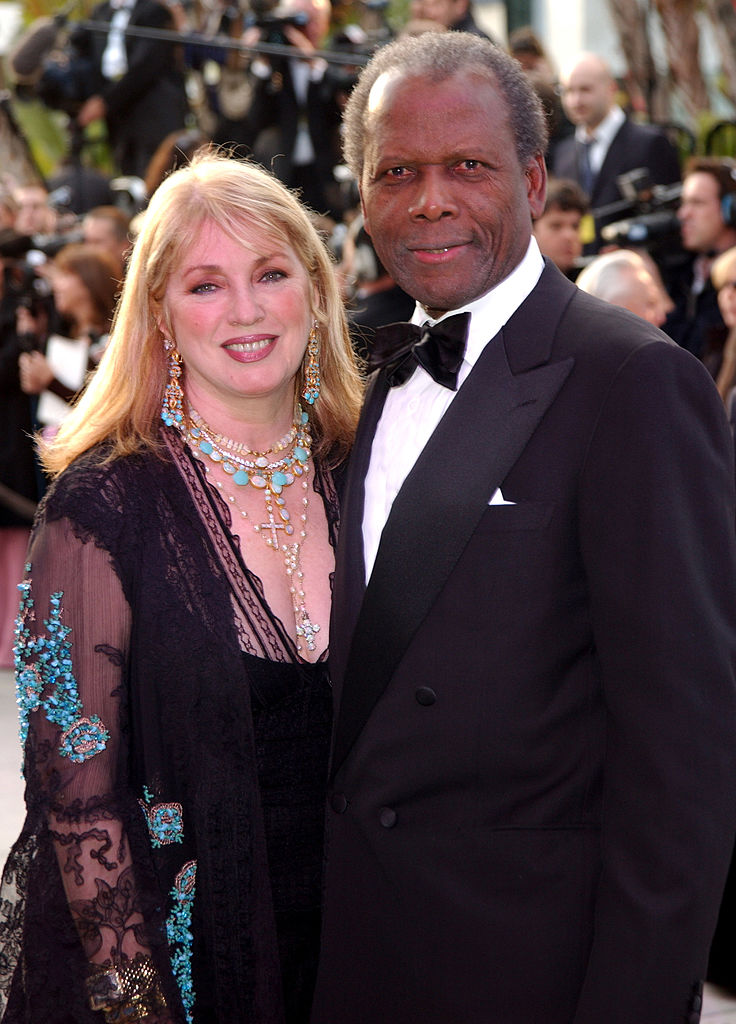 Sidney Poitier (left) with wife Joanna Shimkus during 2004 Vanity Fair Oscar Party at Mortons in Beverly Hills, California, United States. (Photo by Jon Kopaloff/FilmMagic)
Rest in peace, Sidney Poitier. The memory of you will live on forever through the memorable roles you portrayed.